No homage to ZZT would be complete without a game world editor, which allows anyone to create new game worlds. While the game worlds included with ZZT were phenominal and creative adventures, the game simply wouldn’t have had as much impact on me if it weren’t for the build-in editor. In fact, the editor is what led me to buy ZZT blindly.

My story with ZZT is a bit different than a lot of people, I think. I didn’t find ZZT online, for one. The web didn’t exist back then. BBS ruled the online world, and although I was aware of such systems, our family’s 286 PC (with a 20MB hard drive, dual floppy drives, VGA monitor, and a massive 512 KB of RAM) didn’t have a modem. Devoid of any network communication, I would get my games on 3.5” and 5.25” floppy disks through the Shareware system, either by trading demo copies with friends, or by purchasing them for a nominal distribution fee from the grocery store. (Our local Safeway would hang the disks—each encased in thin plastic clamshells—on a rack near the impulse items. It seems strange looking back at it now, but at the time this way of getting software didn’t seem like a limitation; that’s simply how the computer world rolled.)

One of the games I found this way was Jill of the Jungle, Epic Megagame’s second release. It was an ambituous game. Perhaps too ambitious for me, since my poor computer wasn’t advanced enough to run it particularly well. Due to painful performance problems, I didn’t get to play it until we got our next computer several years later, but Jill also came with an ANSI-text catalog (CATALOG.EXE) that advertised Epic’s other current and upcoming releases. This was my introduction to ZZT.

The text-mode graphical advertisement was two screens long, and had a compelling-enough description, but the selling point for me was a single line: “If the hundreds of items and creatures included aren’t enough,” (I’m paraphrasing here), “create your own using the ZZT game editor.” That, to me, was huge. I mean, I created game worlds on graph paper before, but creating worlds that actually run? Mindblowing. I purchased the game via mail order with allowance money, and got the disk a couple weeks later. (Side note: I only ordered one of the four ZZT worlds advertised, but was sent all four anyway with a handwritten thank-you and a game guide. Score!)

The rest, as the cliché goes, is history. And that brings me to JZT. My original plan wasn’t to release JZT until the editor was also done; the game, I feel, simply isn’t complete without it. If anything, JZT is the editor. But, then again, the whole world of web application development is about nimble, incremental releases, so who would I be to sit on a perfectly fun game just because I’m busy polishing up some unrelated parts of the system? Thus, The Village of JZT was released while work on getting the editor polished and easier-to-use continues. But I understand some people are eager for some news, so I thought I’d post the following screenshot showing the editor in action. 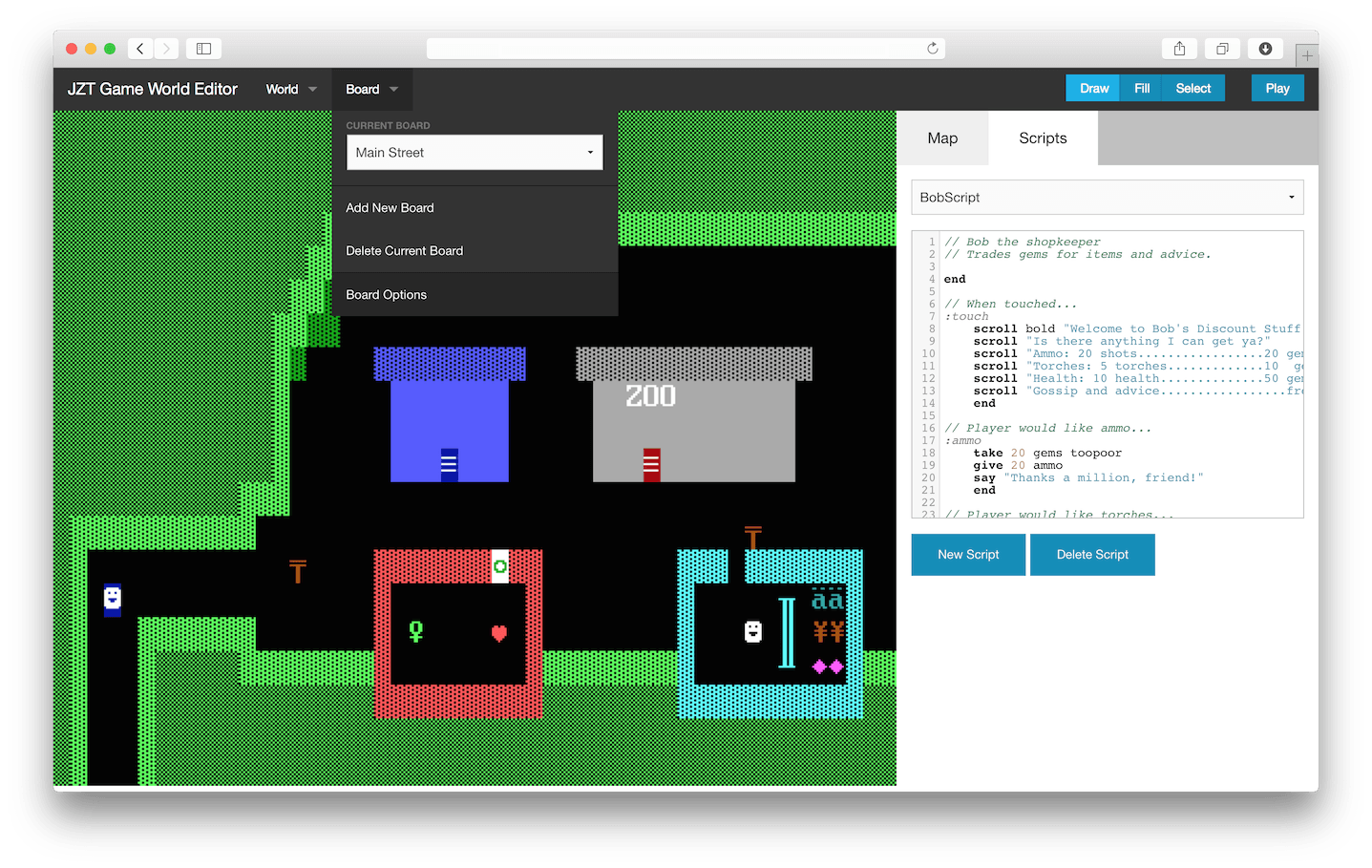 Obviously there’ll be more news to come, so stay tuned! And, as always, feel free to check out the JZT Community page.